where there is Love, there is God

My Farmers' Market friend called me at noon yesterday to tell me that I was going to be interviewed at 6:00. The local online newspaper wanted to feature my little soap booth, my little story. I felt nervous, inadequate.

I was in the car, on the way to drop Jude off at "Na's" so he wouldn't be isolated to our little booth for four hours while we worked the market that evening. I started praying about what I would say in the interview.

I'm learning a lot about myself these days. Over the last few years, I've gotten more and more "quiet." I can't explain exactly why and it's hard to put my finger on it. I guess I avoid drawing attention to myself or being in the spotlight, because it opens the door for people to make judgments; an invitation for others to express their opinions. And sometimes I'm afraid my skin won't be thick enough and that someone's words might penetrate and hurt. Somewhere along the way, I just started keeping things to myself.

So as I was driving in the car, I prayed. I asked God what He wanted me to say. How much would I share? Would I tell the world (or at least all of Lilburn) about His part in our story?

Jude fell asleep on the drive. I looked at him in the rearview mirror as I thought about my words, our story, our miracle. I thought about this story I'd read from Mother Theresa's book, Where There Is God, There Is Love, the day before:


A few weeks ago, I had the very extraordinary experience of this tenderness of God for the little one. A man came to our house with a prescription from a doctor. He said the child was dying, his only child was dying in the slums of Calcutta and that medicine could not be got in India anywhere. It had to be brought from England. As we were talking, a man came with a basket of medicines. He had gone round to the families and gathered half-used medicines for our poor people. And there he came, and right on top of that basket was that medicine. I just couldn't believe because if it was inside, I would not have seen it. If he had come before or after, I would not have connected. I just stood in front of that basket and kept looking at the bottle and in my mind I was saying, "Millions and millions and millions of children in the world--how could God be concerned with that little child in the slums of Calcutta. To send that medicine, to send that man just at that time, to put that medicine right on top and to send the full amount that the doctor had prescribed." See how precious that little one was to God Himself. How concerned He was for that little one. --Mother Theresa
And it just kind of hit me. This interview really had nothing to do with me. At least, I knew it had nothing to do with me. What if our little soap booth could just show people even a glimpse of how much He loves them...how much concern he has for the little one...and them. God was so concerned for Jude that He planted a little seed in our hearts that grew and led us 7,698 miles across the world to a foreign country and a foreign child to bring him home and into our family and call him our own ("God sets the lonely in families"-Psalm 68:6). We could never have orchestrated anything so perfectly. It was God's plan and it is His love that is so beautiful. Where there is love, there is God.
And as far as my interview, I will let you know once it posts. I was on video, and I'm sure I was awkward, so if anything you may have a good laugh. I have to run now, I hear my son calling for "chocolate milk" from his crib : ).
Posted by Bonnie at 4:46 PM No comments: Links to this post

pure127 at the Lilburn Farmer's Market

Friday night was the opening night of the 2011 Lilburn Farmer's Market. We had the privilege of selling our soaps at the market once again this year. Check out our booth! 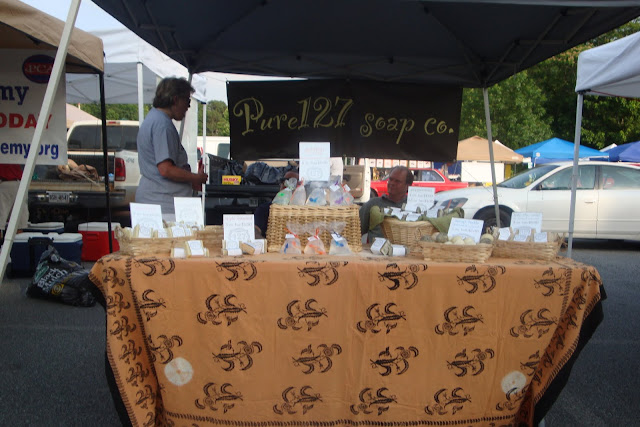 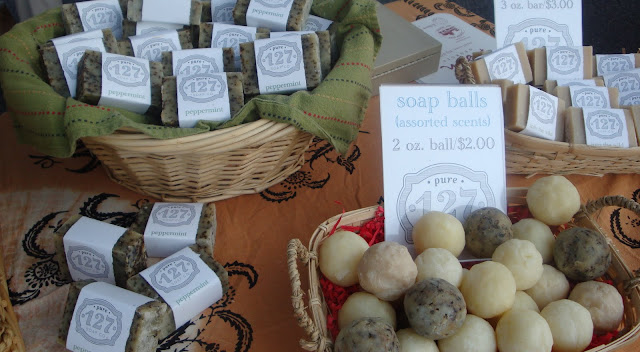 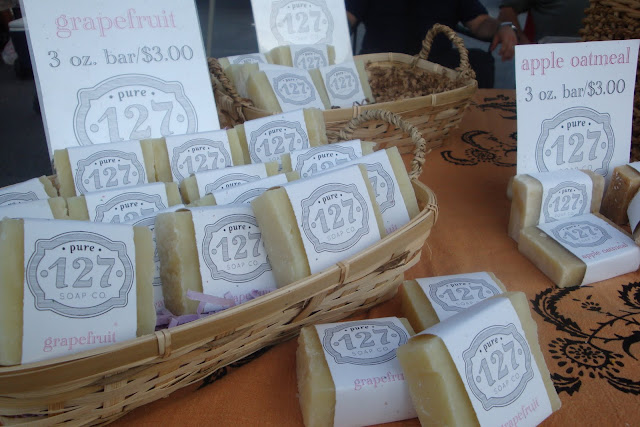 And now, I share with you my latest project... "goldfish in a bag" glycerin soap!
I wish that I could take credit for this super-cute idea, but a friend of mine saw it somewhere and, knowing I'm a soap maker, passed along the idea. It was so much fun, and the best part is seeing just where the fish end up floating around. Each one is incredibly unique and they were a hit with the kids! 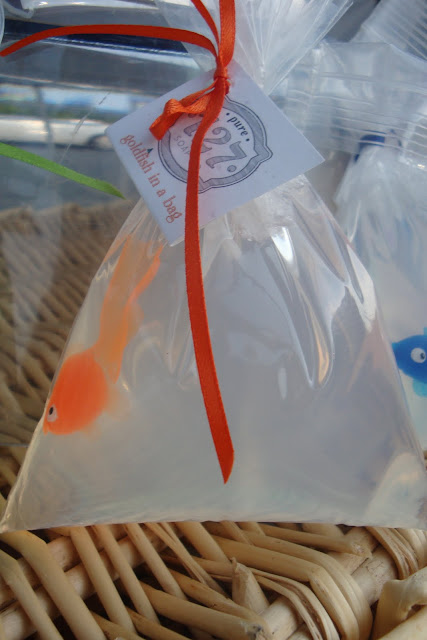 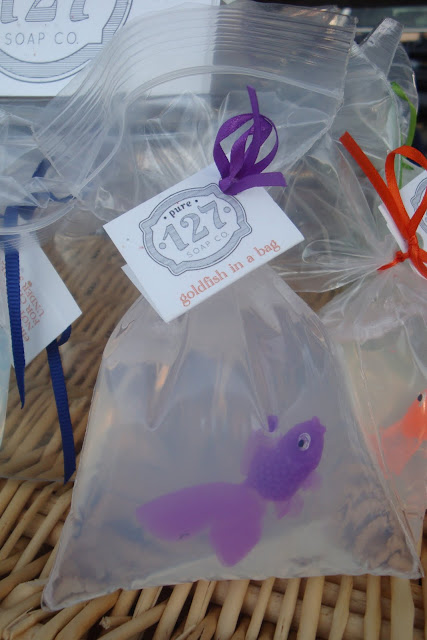 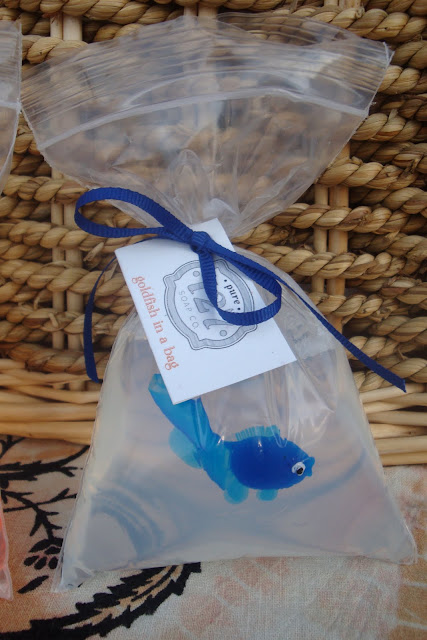 We love the market for many reasons, but one reason is that we love getting to know the other vendors and hearing about how their business came to be. Many of them started with a dream and it is incredible to hear how their dreams became a reality. We were lucky enough to be booth "neighbors" with Brandi Barnes Shelton of Just Add Honey and taste her incredible tea. We also had the privilege of meeting her daughter, Janiyah, who is a 13-year-old photographer in training. She took these amazing photos of our soap! Thanks, Janiyah! 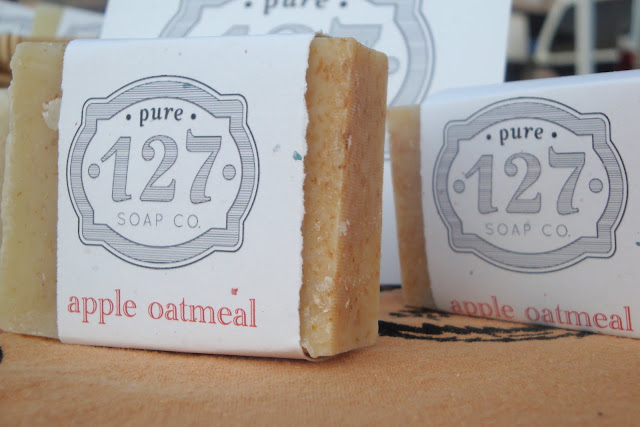 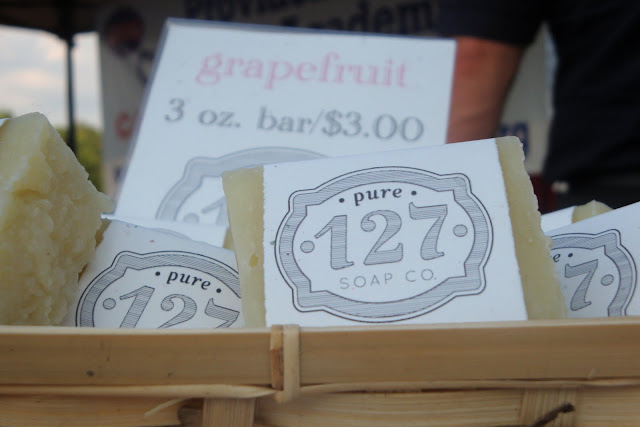 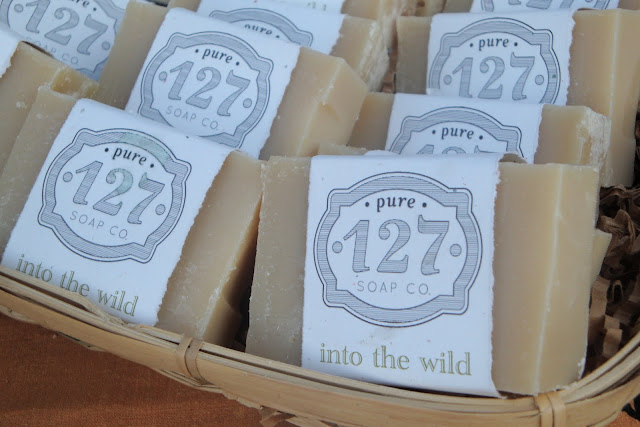 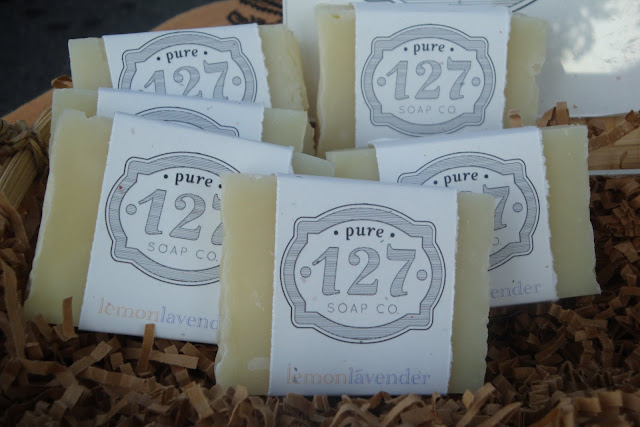 We look forward to another exciting week at the market this upcoming Friday!
Posted by Bonnie at 3:19 PM No comments: Links to this post

Jude has recently started singing. It is the sweetest, cutest, most entertaining thing my ears have had the privilege of hearing. I'm sure every mother feels that way when they hear their child sing for the first time.

Richard and I were eating dinner and entertaining Jude ("dinner" & "entertain" seem to go hand in hand when talking about a 2 year old, don't they?) when he unveiled his latest talent. We were taking turns singing to Jude because we recently discovered that he doesn't like hearing Richard sing and, well, it's kind of funny to hear him ask his daddy to "stop, please." We were trying to see if he had the same reaction when I would sing, so I started singing this lullaby:


Jude's eyes lit up, and he started swaying back in forth in his high chair and singing along to the best of his ability. It sounded something like this: "...eyesss...oneeeeeee. hereeeee...nearrrrrrrr. wakeeeeee...thereeeee. Yea!!! I DID it!!!"

I really shouldn't have been surprised that he recognized the song. I've sang it to him every night for over a year now. But to realize that he actually had the words memorized was pretty cool. And now I have to share with you the back story on this lullaby.

I heard this lullaby as a child. I was 5 years old when I watched the 1985 Alvin and the Chipmunks episode, A Chipmunk Reunion. And I remember this endearing moment in the movie when Alvin, Simon and Theodore's mother sang them this song:

That song always stuck with me, even though I haven't seen the movie or heard the song in over 25 years. But when I became a mom, the song--the tune, the words--it just seemed like the perfect lullaby for my baby boy.

Yesterday morning, Richard came downstairs to find me crying hysterically. While searching for Vinny's Lullaby on the internet, I came across several other videos from the same episode and I had the realization that the chipmunks were orphans. Their mother gave them up as a last resort because she knew she couldn't take care of them and wanted to give them a chance at life. You can go ahead and laugh now. Richard did. Especially when he realized I was crying to this:


I guess there is a reason that song always stuck with me :).
Posted by Bonnie at 8:36 AM No comments: Links to this post