Today was Jude's second day of preschool. He absolutely LOVED his first day last week. This morning he seemed a little less excited, but only because he was tired and wanted to play with his new cars he got  on a trip to the mall with Aunt Na yesterday. As he sat, sleepily, in front of his bowl of blueberry oatmeal this morning he said, "Hank's my best buddy ever."
Hank has been with us a long time now. He was purchased on a trip to Target with my mom, just weeks before I was to leave for Ethiopia to meet Jude. I was telling my mom about how a co-worker of mine commented that I was "pregnant like an elephant" with Jude. She was pretty accurate in her statement, as elephants carry their babies for 22 months (the longest of any land animal, fyi) and I waited on Jude for 24 months. So when we saw Hank, brown and fleece with tan elephants all over, my mom insisted she buy him for Jude.
I never intended for Hank to become Jude's best buddy. In fact, at first any old blanket seemed to do. Then, the blanket had to be fleece. And eventually, the blanket had to be brown and covered in elephants. And so their friendship began. Hank and Jude have been through a lot together. 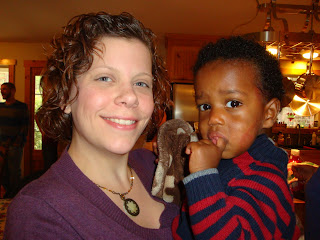 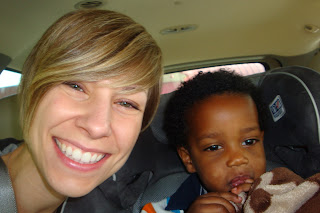 first trip to the zoo 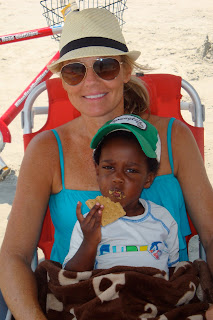 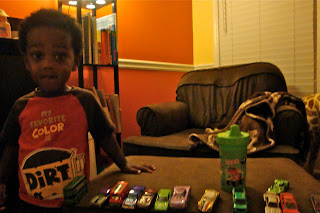 and of course, hanging out and playing cars 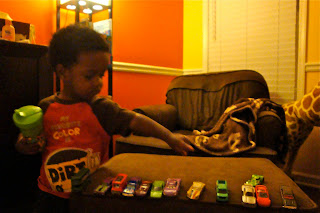 Hank mostly just likes to sit back and observe 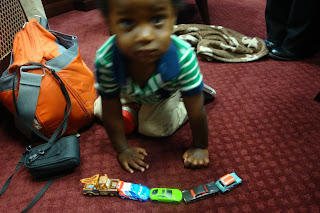 and Hank was there to support Jude when
he became an American citizen
I guess I can see why they are best buddies. And after his bowl of oatmeal, Jude was suddenly energized and ready for school. His teacher commented on how much he loves school and how smart he is. And so far he hasn't needed Hank while he's at school, but he does tell Hank how much he missed him when they reunite for his afternoon nap : ).

Today was Jude's first day of pre-school! After much debate we decided to enroll him for 2 days a week for half a day, mostly for the social interaction with other children. Plus, we love the school and especially the director. We've been preparing for this day all summer. Jude and I have been reading books about school, watching his favorite Barney episode about school, and talking about school for weeks. I guess all of the preparing paid off, because, as we pulled into the parking lot this morning, he was kicking his little blue Converse with excitement. He exclaimed, "School!" and "Happy!" as I opened the car door to get him out. When we got near the door to enter the building, he said, "I walk." I set him down, handed him his Lightning McQueen lunchbox and rolling Thomas backpack, and he carried them all by himself. He looked like a little man!

When we reached his classroom, he walked right in the door and never turned back, not even to say goodbye. It may sound sad to some moms, but I was so relieved and proud that he felt so secure and confident. We have come a long way, and separation anxiety seems to be a thing of the past (at least for Jude; I, on the other hand, still get a little anxious : ).

I was able to snap this photo when we entered the building, but he was definitely too excited to focus on the camera. However, you can still see that he is grinning from ear to ear. 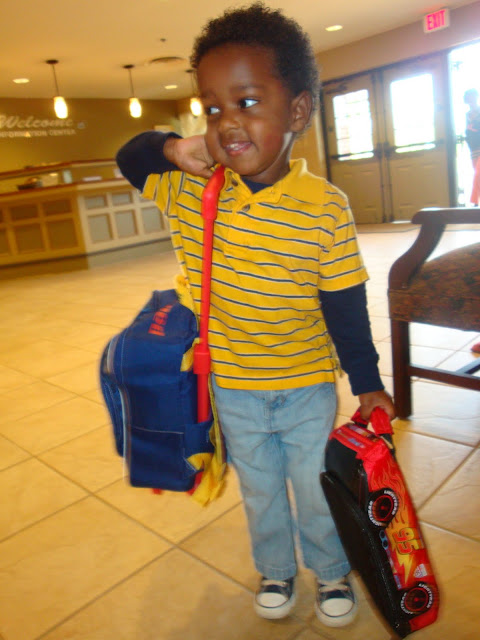 We've been reading a book called School about a little family of mice who go off to school and the baby mouse, Bitty, sneaks away to go to school with her brothers and sisters, even though she's too little. In the end, Mama Mouse comes to school and picks up Bitty to bring her back home. Jude always reiterates this part of the story and says, "back home with Mommy?" and then hugs me. I'm already looking forward to our "reunion" when I pick him up today. I can't wait to hear about his day!
Posted by Bonnie at 11:52 AM No comments: Links to this post